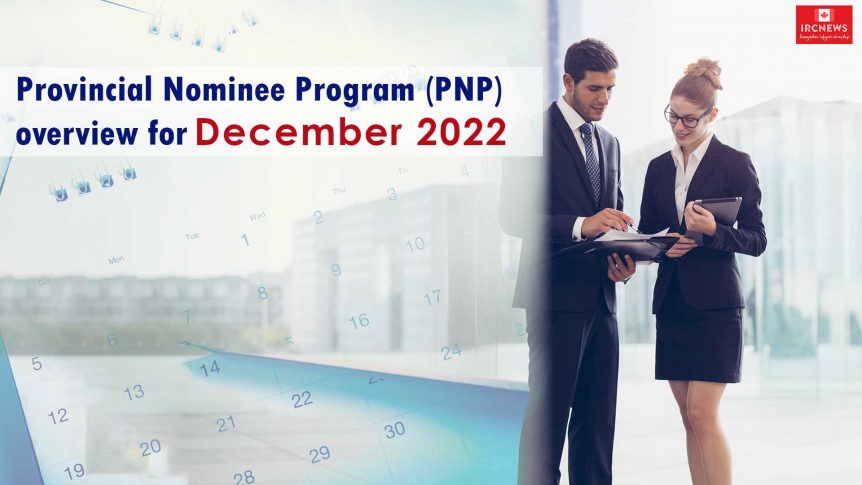 Good day ladies and gentlemen, this is IRC news and I am Joy Stephen, an authorized Canadian Immigration practitioner bringing out this release of the PNP overview for the month of December, 2022 from the Polinsys studios in Cambridge, Ontario. Today is the 3rd of January, 2023.

This year, 2022, Canada’s PNP programs have done very well considering it is the 12th month of the year. The provinces picked over 3393 people for possible PNP programs in a month. The PNP program offers Provinces the choice of selecting their own residents. Most funded services for citizens are offered by Provinces to their residents like Health Care and Education.

Through the British Columbia Provincial Nominee Program, the province invites the top-scoring provincial candidates on a weekly basis. Invited candidates may apply to Express Entry British Columbia, Skills Immigration, Tech stream, Childcare : Early childhood educators and assistants (NOC 42202), Healthcare, Healthcare assistants (NOC 33102) and other priority occupations ( NOC 31103 , 32104 ) . Also invitations were sent to candidates under Entrepreneur Immigration- Regional Pilot and Entrepreneur Immigration – Base .These programs are some of the most active in the country.

Manitoba issues invitations regularly through the following three streams: Skilled Workers in Manitoba, Skilled Workers Overseas, and Special Immigration Measure – Ukraine. The province held a draw on December 01, 15, 16 and 30 issuing a total of 1864 Letters of Advice to Apply. Out of which 744 letters were sent to candidates who had a valid Express Entry profile and Job seeker validation code . 1030 invitations were invited directly by Skilled Workers Overseas and 131 invitations were invited directly by the MPNP under a Strategic Recruitment Initiative under Skilled Workers Overseas Category. As part of Manitoba government’s response to the situation in Ukraine and in line with Immigration, Refugees and Citizenship Canada special immigration measures – Ukraine draw for those affected were conducted as on December 29 issuing a total of 16 Letters of Advice to Apply.

Prince Edward Island Provincial Nominee Program (PEI PNP) draws are prescheduled and held once or twice a month. This year’s schedule was released by the province on January 1. The PEI PNP draw for December was held on December 01 and 15 and invited 198 candidates from the Labour Impact and Express Entry streams and 7 from the Business Work Permit Entrepreneur stream.

On December 15 & 21, 2022, Saskatchewan held a draw inviting a total of 1101 candidates. The invitation was issued to 501 candidates under Saskatchewan Immigrant Nominee Program (SINP) Express Entry and 600 candidates through Occupations In-Demand.

On December 21, 2022, the Ontario Immigrant Nominee Program (OINP) issued invitations to apply to potential candidates in the Expression of Interest system pool who may qualify for the Masters Graduate stream with a score of 46 and above.

On December 13, 2022, the Ontario Immigrant Nominee Program issued notifications of interest to potential candidates who may qualify for Ontario’s French-Speaking Skilled Worker stream.The OINP targeted candidates with a comprehensive ranking system score of 341-490.

Please subscribe to this channel to keep abreast of Canadian Immigration news and Immigration data analysis release. The Wholesome approach offered by Polinsys supports multiple Canadian Permanent Residence pathways both federal and provincial, on a single platform. Please attend the FREE on-demand webinars by following this link: https://polinsys.com/p. From all of us at IRC news and especially from your Polinsys team, we thank you for watching! Please follow guidance from the Canadian Government on who can charge for Canadian Immigration services Redirect Link: https://polinsys.co/rep and if you want to obtain a FREE evaluation directly from a Canadian Authorized Representative, please visit Free Immigration Evaluation Multiple Pathways: https://myar.me/evaluationXX