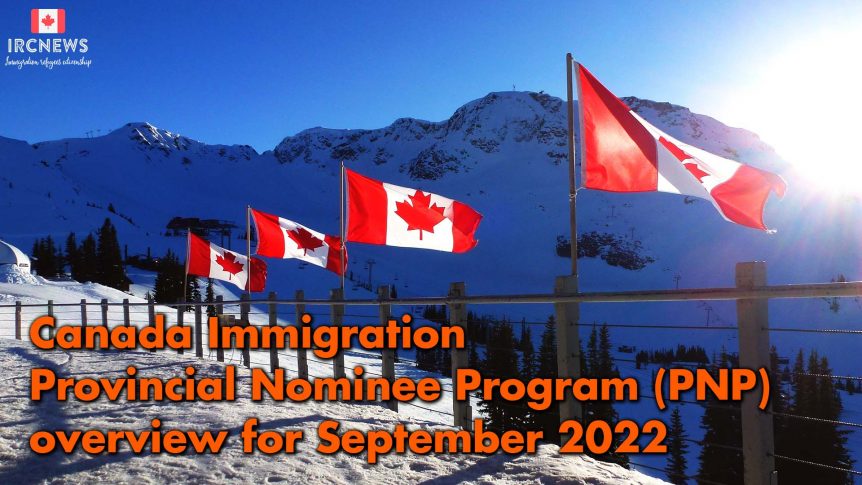 Provincial Nominee Program (PNP) overview for September 2022:
Good day ladies and gentlemen, this is IRC news and I am Joy Stephen, an authorized Canadian Immigration practitioner bringing out this release of the PNP overview for the month of April, 2022 from the Polinsys studios in Cambridge, Ontario. Today is the 7th of May, 2022.

This year, 2022, Canada’s PNP programs have done very well considering it is the 9th month of the year. The provinces picked over 12576 people for possible PNP programs in a month. The PNP program offers Provinces the choice of selecting their own residents. Most funded services for citizens are offered by Provinces to their residents like Health Care and Education.

Ontario: September 2022 Snapshot
On September 07 and 29 2022 the Ontario Immigrant Nominee Program (OINP) issued 1,521 and 1,340 invitations respectively to apply under the Ontario Express Entry Skilled Trades stream and On September 23, 2022 issued 363 targeted notifications of interest for Ontario’s Express Entry French-Speaking Skilled Worker Stream
On September 20, 2022, the OINP issued invitations to apply to potential candidates in the Expression of Interest system pool who may qualify for the Masters Graduate Stream with a score of 33 and above.
Also on September 27, 2022 OINP issued three targeted invitation to apply to a potential candidate who may qualify for the federal Economic Mobility Pathways Project under the Foreign Worker stream.
On September 28, 2022, the OINP issued targeted notifications of interest to 1,179 candidates who may qualify for Ontario’s Express Entry Human Capital Priorities (HCP) Stream with a comprehensive ranking system score of 496 and above.

British Columbia: September 2022 Snapshot
Through the British Columbia Provincial Nominee Program, the province invites the top-scoring provincial candidates on a weekly basis. Invited candidates may apply to Express Entry British Columbia, Skills Immigration, Tech stream, Early childhood educators (NOC 4214) and Health care assistants (NOC 3413). These programs are some of the most active in the country.

Prince Edward Island: September 2022 Snapshot
Prince Edward Island Provincial Nominee Program (PEI PNP) draws are prescheduled and held once a month. This year’s schedule was released by the province on January 1. The PEI PNP draw was held on September 15 and invited 142 candidates from the Labour Impact and Express Entry streams and 5 from the Business Impact stream.

Saskatchewan September 2022 Snapshot
On September 01, 06, 07 & 28, 2022, Saskatchewan held a draw inviting a total of 3790 candidates. The invitation was issued to 1774 candidates under Saskatchewan Immigrant Nominee Program (SINP) Express Entry and 2016 candidates through Occupations In-Demand.